The Trouble with Manuka Honey

The other side of Manuka

The previous articles in this series looked at the differences between unfiltered ‘raw’ honey and most of what is available to buy in supermarkets with this label. One of the reasons why most honey you will find in supermarkets is clear and liquid (and rarely crystallises) is because it has been strained to remove impurities, filtering out the pollen in the process. This is also a way for manufacturers to conceal the place of origin of a particular honey, as pollen can be tested to discover which plants the bees visited and therefore its place of origin. Concealing the origin of a particular honey is typically a sign of an intention to mislead, and this has become a very live issue with the recent attention to Manuka honey – that is, what many manufacturers and retailers have been calling Manuka honey. Just as ‘natural’ has no legal definition and is exploited by marketing to, at best, mislead customers who aren’t in the habit of reading labels too closely, Manuka presents another case of commercially-driven sleight of hand.

Derived from pollen produced by the Manuka tree, the honey is produced exclusively in Australia and New Zealand. It is widely believed to possess health giving properties deriving from a much higher concentration of the antibacterial compound methylglyoxal (MGO) compared to regular honey. Though there has been insufficient research into the ultimate impact that consumption of Manuka has on the human organism, in recent years its reputation has exploded, with endless articles in print and online praising its qualities as a superfood and even as a miraculous skin food. None of this in itself is new; every six months a new food or extract is discovered as having allegedly essential and life-giving qualities, from fish oil to matcha tea powder; what is unusual is the extent to which Manuka’s notoriety has been leveraged, often unscrupulously, to turn a profit.

Its reputation as a uniquely potent member of the honey family means that it commands prices far higher even than those expected of locally produced or raw honey, and there has been a bewildering proliferation of brands offering the stuff at prices up to and beyond EUR 20 for a small jar. In the light of recent media attention to the subject, it has emerged that, whereas total production of Manuka is limited to just 1,700 tonnes per year, at least 10,000 tonnes are consumed annually worldwide (as of 2016). This indicates that the majority of honey sold under the name of Manuka is actually fake, and that the majority of customers – not just a few – have ended up with something which is often little better than the cheapest mass-market honey, coloured and flavoured to seem like the genuine article. 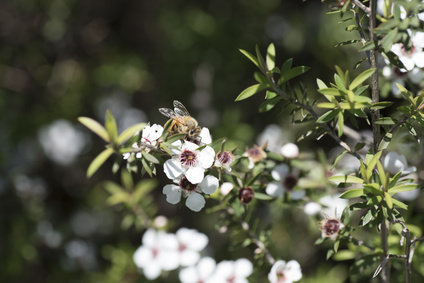 It should come as no surprise that a product in short supply, and with such hype surrounding it, should fall victim to both inflated pricing and counterfeiting. It is in the nature of markets to expand to meet demand, regardless of how well-founded that demand is or the resulting deceit in some marketing and branding efforts. However, the consumer demands both the genuine article, regardless of what that might be, along with a limitless and convenient supply of it, and this contradiction is not sustainable. In the end, it’s a little hypocritical to complain about fraud and inauthenticity when it comes to whatever fad is currently being fuelled by various media, when this same pattern of promotion and hype is one of the necessary conditions for it. One kind of dishonesty leads to another, and the only losers are those who buy into it.

Doubtless there are those who are die-hard Manuka devotees and won’t hear of anything else, but there are less costly and more sustainable alternatives. One example is honeydew fir. This variety is produced not from nectar but from honeydew, a substance produced by aphids from tree sap; the resulting honey does not contain pollen, making it a good choice for those who normally cannot consume it because of pollen allergies. It is also a more ecologically sound option than Manuka, given that its production is less geographically restricted and so it usually covers fewer miles to reach its destination.

It is hard to justify purchasing a high-priced package when there is no guarantee that the contents are as promised as the label. That’s as good a reason as any to question hype about the ‘next big thing’. It makes more sense to look closer to home – what you find may not be as expensively branded or widely advertised, but it’s still probably a better product.

Mias’s Honey brings best of hand crafted products to Ireland. Our handpicked products are of high quality from producers in Europe. Homemade honey, craft chocolate, zero-waste household appliances, nuts and fruits directly from farmers and much more to discover in our shop. We are always near you, delivering nationwide.

This website uses cookies to improve your experience while you navigate through the website. Out of these cookies, the cookies that are categorized as necessary are stored on your browser as they are essential for the working of basic functionalities of the website. We also use third-party cookies that help us analyze and understand how you use this website. These cookies will be stored in your browser only with your consent. You also have the option to opt-out of these cookies. But opting out of some of these cookies may have an effect on your browsing experience.
Necessary Always Enabled
Necessary cookies are absolutely essential for the website to function properly. This category only includes cookies that ensures basic functionalities and security features of the website. These cookies do not store any personal information.
Non-necessary
Any cookies that may not be particularly necessary for the website to function and is used specifically to collect user personal data via analytics, ads, other embedded contents are termed as non-necessary cookies. It is mandatory to procure user consent prior to running these cookies on your website.
SAVE & ACCEPT
X Close